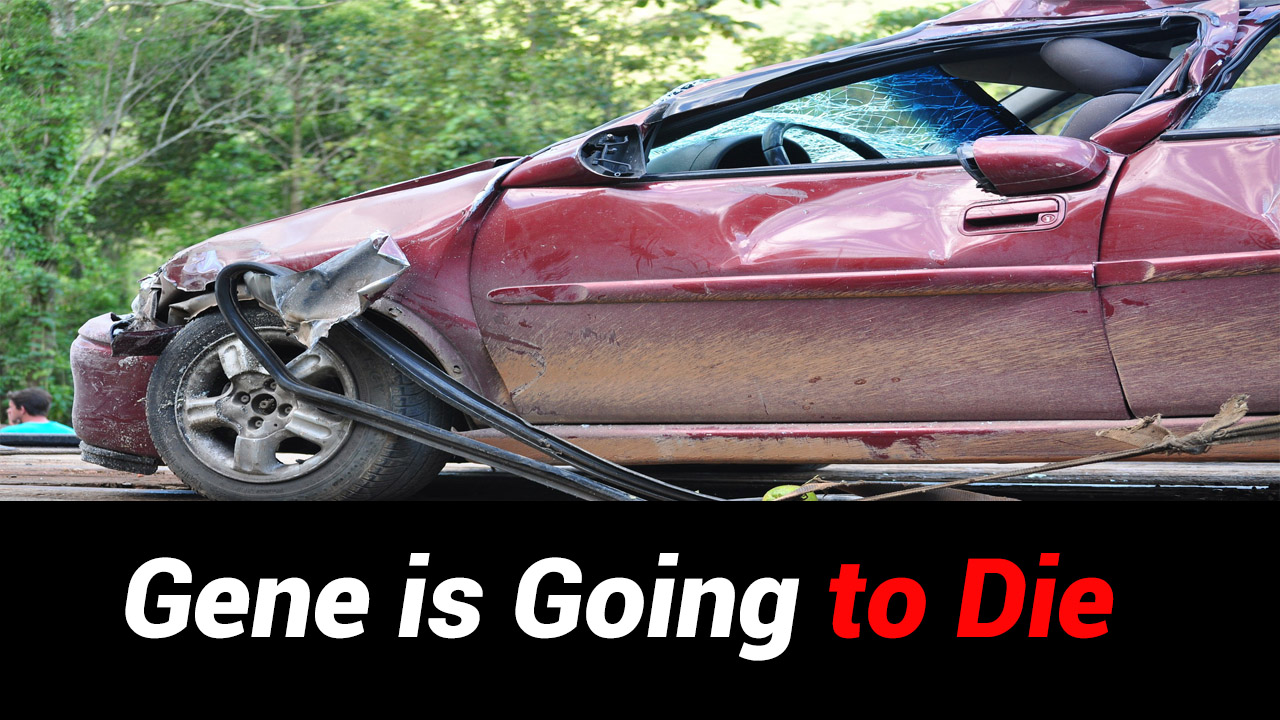 My name is Peter Jensen, I can see things before they happen. I don’t want to or like it, but I do.

“What you looking at butthead?.”

That’s my sister Gene. She’s older than me, but not much. They call us the Irish twins, this means we were born within a year of each other and since Irish people apparently breed like rabbits, we’re called Irish twins. As far as I know though we’re of Scandinavian stock, all blond haired and blue eyed, not a ginger hair between any of us. Dad likes Guinness though.

I might be wrong, I’ve read that people like me cannot see our own deaths and just the deaths of others. So maybe I’m wrong. Maybe she can see me dying and we all die together. I doubt it though. Gene’s going to die and it’s going to happen very soon.

“You better not be threatening me you little goth freak?” she says.

Gene is your typical popular, highschool girl, stereotypically so. I know she loves me, but I know too that she’s ashamed of me when it comes to school. She’s gotten better since we finished school for the summer, she thinks she’ll be popular at university, especially since I won’t be seen around cramping her style. She’s going to die though, but she’s been very nice to me since she finished high school. I’ve one more year to go. I want to study to be a vet, but I’ve already see that I’m going to end up as a military doctor thanks to some bullshit war nobody wanted, except for the suits of course.

Gene has two friends who are always around, Victoria and Emma. They’re not very nice, they look gorgeous, but they’re soulless, empty girls who will both get pregnant on prom night and marry their boyfriends who will both end up being jarheads. They’ll both get a military pension though, when they both die in an airstrike in Istanbul, so at least there’s that. Strange how their lives synchronise. Maybe they’ll end up being lesbian life partners after their husbands die, but I can’t see that far ahead. Maybe I just want them to be lesbians. Sorry, I’m a horny teenager.

At Gene’s funeral, they’re going to wear tight black dresses, sunglasses, have their hair done beautifully and tears will stream down their faces. I’ll never see them after that, but that’s a good thing. They don’t like me and it’s not that I don’t like them, they’re just such stereotypes and boring that they mean almost nothing to me. I love you Gene but if you weren’t my sister I probably wouldn’t and honestly, after you die my life is easier. Although Dad will blame me somewhat. Sorry Gene, but this isn’t, wasn’t, and won’t be my fault.

“Oh my god, shut up. You’re such a creepy weirdo!” She punches me then. This will probably be the last time she touches me. I pretend it hurts to give her some satisfaction.

In the front seat Mom turns around and gives us a look of daggers, you know that look that parents give you when they’re regretting that they had children. Most parents never admit it publicly, or even privately, but they sure as hell think it. Mine do a lot anyway and yours probably do too. Mine like to think about where they’d be and what they’d have become in their lives if they hadn’t had kids. I’d like to have the gift to see those kinds of things, it exists, but so far I don’t have it. Maybe I can develop it, maybe not.

“You two are a bit too old now to be hitting each other eh?” she asks. It’s not really a question though, it’s a statement really. Adults love those condescending, passive aggressive bullshit comments. If you try and make comments like this as a kid you just come across as a bit of a douchebag.

Ahead in the road I see a sign that says Rest Stop 2 miles’ and in smaller writing beneath it ‘next rest stop 66 miles’ My Dad’s a fast driver, too fast to be honest, but at the speed he drives it’ll probably take him about 25 minutes. I need to pee, but I don’t want to stop. Gene’s about to meet her maker. I can’t see how it happens, only the aftermath but I know it’s going to be soon.

We’d stopped at a KFC a couple of hours ago. I don’t really like their food, but I drank a huge Coke, it felt so good because it helps with my travel sickness. I hate having travel sickness, I know I should watch the horizon and I do, but as soon as I stop my head feels heavy and I get groggy. I really need to pee, but I don’t want to stop, I don’t want Gene to die.

Gene notices that I’m fidgeting around ‘He needs to pee, he’s going to pee his pants if you don’t stop. We don’t want a repeat of Aunt Sally’s do we’

“Come on Gene that was what, 13 years ago, you need to get over that, or was seeing a kid pee himself so traumatic.”

“Be nice to each other” Mom says. Yea, she’s right, but I’m trying to let my sister live longer…

“I need to go too” Gene says

Damn I think, that seals it then.

Dad pulls off the highway and we make for the rest stop. There are two lanes going in and probably out, one for trucks and one for cars. The place is huge, a gas station, some restaurants, even a small playground for kids. There’s a huge monument here too for some soldiers long dead in some war that was not needed. Maybe it’ll come loose and kill Gene? Squishing her like you’d squash a bug. That would be horrific, I hope that doesn’t happen.

We all pile out of the car, the boys going to the men’s restroom and the ladies to the ladies. They have those stupid self-flushing toilets. They must flush at least three times more than they’re needed to, wasting so much water all the time. Or does that just happen to me.

It’s so loud in there, toilets flushing constantly and those high powered hand dryers that make your skin move like there’s something underneath trying to escape.

“You want some chocolate, champ?” Dad asked. I don’t really but he does, so I say yes, sure, so we go and buy a huge pack of those cinema style maltesers.

We head outside and wait for my mom and Gene to return. Maybe Gene’s been sucked into the ever flushing toilets and she’s drowned. Is that what’s taking them so long?

No, they return a moment later, also with a bag of maltesers. My family really loves maltesers. But they’ll remind mom and dad of Gene, so we won’t be buying them ever again.

We get back in the car and I begin to think, maybe I’m wrong. For the first time one of my premonitions hasn’t come true. Thank god, Zues, Yahweh, whoever.. But this is great, Gene is sitting beside me and she’s alive and….no, I’m wrong, she’s still going to die.

Dad starts the car and as he does so I tell Gene ‘I love you Gene, I’ll miss you’ I say it at the moment the engine starts so Mom and Dad don’t hear me. Gene hears me though and for a split second I think she’s gets it, she knows something’s going to happen…but I’m wrong. She tuts, shakes her head and say’s ‘you’re so weird butthead, but I love you too.’

Mom hears that and turns around ‘What’s going on’ she asked.

Wanting to play the cool kid Gene says nothing, she grabs my drawing book off the seat and starts flicking though it

Dad heads toward the exit, there’s a truck ahead of us in the far lane.

“Oh my god, there’s so many naked women in your book, you’re such a perv” Gene shouts, laughing

Mom, looking at me, Mister are you drawing naked ladies, she’s teasing, I’m not in any trouble, she knows I love drawing and she knows I’m starting to think about girls and wanting a girlfriend.

“Hahaha, says Gene, one of these looks like Emma. Oh my god, do you have a crush on Emma? I’m going to text her and tell her, hahaha, she’s going to be so embarrassed….”

“No, give me that back, none of them look like Emma.”

Dad gets involved now as he’s speeding up to pass out the truck on the inside, rather than wait and let him go first like a normal driver…Emma’s a nice girl kiddo, you could do worse….

With that, I make a grab for my book but Gene throws it into the front and the book hits Dad, it’s an accident, but he jerks the wheel and……time suddenly slows down. The truck driver obviously didn’t expect a car to try and take him over from the wrong side and our car hits his truck.

I come too and the paramedics are attending me and Mom, we have some cuts and bruises. Dad and Gene have been airlifted to the closest hospital. It’s 21 minutes away by helicopter. Gene dies in the air from internal injuries. Dad has a broken collar bone and left leg. He’ll walk with a slight limp for the rest of his life.

The paramedic finds my drawing book and asks if it belongs to us. “It’s mine” I say “It’s the reason we crashed”

Don’t blame yourself she says, you’re dad and sister are in great hands, they’ll be fine”

Maybe she believes the lie, maybe she’s convinced herself over the years. In fifteen minutes she’s going to get a call to attend a murder scene where a man has decapitated his lover. It’s not the first time he’s done it and he’s going to do it 5 more times until he’s caught in a cabin in the Cherokee National Forest.

Dad gets out for the funeral 10 days later. Our relationship is never the same, even though I didn’t throw the book, he blames me for trying to grab it off Gene. Mom though hugs me for longer when we hug and she watches me for a second longer than usual every time she glances. I hope Gene is at peace and in a good place. Something tells me though there’s isn’t a good place after this.