Over the past week or so I’ve been (basket)balls deep in that Netflix programme, The Last Dance. It’s an incredible piece of television, the main story point being that it’s a look at the last season of Phil Jackson‘s reign as coach of the Chicago Bulls. Jackson had steered his Bulls to five NBA titles over his eight previous seasons, winning three in-a-row from 1991-93 and had also won the two previous seasons; 1996 and 97. Going into his last season the Bulls were going for their second ‘threepeat’ and their starman, Michael Jordan was going to retire at the end of the season, as he didn’t want to play under a new coach. Jackson sat his team down during preseason and presented them a document called The Last Dance, knowing it would be the last time this set of players would play a season together and they wanted to go out with a bang.

The Last Dance isn’t centered on Phil Jackson though, as cool as he is, it’s all about Michael Jordan and what makes it such a riveting piece of viewing is that they succeed in making the greatest basketball player of all time into an underdog. He takes everything personally and turns it all into the inspiration he needs to drive his team forward to win games. All it takes is for one opposing player to say something, even something just slightly derogatory, about him or the Bulls and that was all Micheal needed to make him push harder to win. It’s an incredible insight into the mindspace of one of the greatest sports stars of the modern era.

From a spiritual or psychological point of view there are some very interesting topics too. As above we see Jordan struggling with this hero/victim complex for the entirety of his career, he plays it out against teammates, opponents, the media and even the suits running the Bulls at the time. We also see the presence of the archetype of the Father. Jordan’s father, James, had been very close to his son; his advisor, his shoulder to turn to and, above all, his friend. On a trip back from seeing some friends he stopped to take a nap and was cruelly murdered for being in the wrong place at the wrong time. His head of security Gus Lett then becomes Jordan’s father figure and we see the closeness of their relationship especially when he became ill with cancer.

Amazingly another of the Bull’s teams, Steve Kerr, an important cog in the Bulls from 1993-98 also lost his father when he was murdered by Islamic Jihadists in Beirut in 1984. As the series plays out the Bulls win the final of their second threepeat NBA titles but it ends on a bittersweet note; the fans and players wanted Jackson to stay on but the suits had made their minds up and even after winning it when Jackson was now asked to stay on he refused. The team fell apart; Jordan retired, as promised. Their two other best players, Dennis Rodman (who’s great craic in his interviews) was traded to the LA Lakers, Scottie Pippin was traded to the Houston Rockets and even Kerr was allowed leave for the San Antonio Spurs. While all this information is being shows to us on screen the soundtrack becomes a Pearl Jam song; Present Tense. Which is a bit of a break for the programme as the soundtrack is almost completely hip hop and rap but, I think, why this song was included was because of this one lyric: You can spend your time alone, re-digesting past regrets, oh. While the Bulls could have continued they’d become the greatest NBA team of all time and there was nothing to regret and no reason to sit there re-digesting past regrets.

Throughout the series Jordan speaks about his belief of ‘living in the moment’ and that there is only ‘the here and now’. Other basketball stars and Jackson also speak about Jordan’s great ability to get in the zone like this; to push out all distractions and to be totally and utterly focused on what was in front of him. Jackson had tried, pretty successfully too, to ingrain this in his players, using Zen and Native American methods regarding meditation and concentration.

Indeed, there’s a man called George Mumford, he wrote a book called The Mindful Athlete, he’d been working behind the scenes at the Bulls teaching Jordan and Scottie Pippin mindfulness meditation although at the time he wouldn’t have used that title as it would have been a bit too ‘woo’ but he did teach them about ‘being with what is’ and ‘being in the moment’. There’s a decent article here about him working with both Jordan and Kobe Bryant. Good interview here too.

Present Tense though, it stuck with me and regular podcast listeners know I’m a massive Pearl Jam fan. It’s the 10th track off their fourth album No Code. Now, No Code is probably the most beloved of Pearl Jam albums among the hardcore and nobody can really explain why. It’s weirder than other Pearl Jam albums, it’s not the verse-chorus-verse-guitarsolo-chorus we’re used to. It’s got weird time signatures, weird lyrics, weird instruments, strange beats. This is what makes it great though, it’s a band doing something different while still managing to be the same band. Look, it’s not Radiohead going from The Bends to OK Computer but it’s a band trying something new and succeeding. Much of the album was actually recorded in Chicago too and lead singer, Eddie Vedder is from there and Vedder and Rodman have been friends for quite a while, even Phil Jackson thanked Vedder for putting Rodman back on the straight and narrow when he’d go AWOL.

The final episode of The Last Dance starts off with one of the talking heads saying “Michael’s a mystic. His gift was not that he could jump high, run fast, shoot a basketball. His gift was that he was completely present, and that was the separator.” He says Jordan once said “Why would I think about missing a shot I haven’t taken yet?” We match this to some of the lyrics of Present Tense as they play out the series “Makes much more sense, to live in the present tense.”

There’s another powerful song on No Code, track number three which has a similar theme, Who you Are. While Present Tense is about, obviously enough, trying not to worry about the future because it will always be unknown, while Who You Are is very much an existential song, most songs on No Code seem to be, but this one is about the fact that everything in life has a role. The song begins with a message about why we’re here and what we do:

Come to send, not condescend
Transcendental consequences, to transcend
Where we are, who are we?, who we are

But then the person sees someone worn out by life, jaded;

Trampled moss, on your soul
Changes all, your apart
Seen it all, not at all
Can’t defend the command

He then shows the second person about the chances in life, the things that seem to not mean much but are actually very important, even the wind blowing can be a miracle when we see it that way. And then it ends by implying that even traffic lights (stoplights) have their role, as do each and all of us: 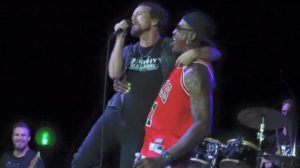 Stoplight, plays its part
So I would say, you’ve got a part
What’s your part?
Who you are, you are who, who you are

And there we have it, you’re role is simple, it’s to be who you are. True Will we can say, can’t we?

And Jordan knew this, still knows it, he knew his role and lived it in the present tense. Vedder’s long been held up as an atheist but the existentialist questioning in his lyrics over the years have long held that he’s been/is some kind of spiritual seeker, looking for answers as to why we’re here and what’s the purpose of it all.

Quite a few years ago now he was asked about his beliefs. His reply was quite Zen, he said “All I really believe in is this moment, like right now.” Jordan, as said earlier, says the same throughout the Last Dance, on many occasions too. So here we have two giants of their professions, reaching Samadhi while doing what they were/are here to do. And if they can, we can too. Sure we can run away from our lives and join an Ashram, or become a brother at a monastery but we don’t have to. We can do what we’re good at, put all else aside when we’re doing it and be present in the moment where all else seems to disappear and we’re completely at one with, well, everything.

This of course ties into the idea of Karma Yoga spoken about so much in the Bhagavad Gita, doing what we do leads to freedom, liberation or Samadhi and it leads to it by doing what we do with our full attention, without desire for an outcome. To put it another way; it’s as simple as doing things and actually doing them and not having your head in the clouds while doing them. Fretting over the past changes nothing while being anxious about the future is, well, pointless, as Jordan says above “Why would I think about missing a shot I haven’t taken yet?” Easier said than done Spud, you might be saying and yes, you’re right, but you’re also wrong. If we try and make it easier to do than to say then we’re doing it properly. I’m going to keep trying anyway.