Let’s try something a bit different, write about something not so spirituality-linked although it still is but anyway you’ll see.

This afternoon I was under the obligation to collect Wee Murf 2 from preschool, usually it’s Mama that collects numero 2, I get No.1 but herself is as sick as the whole of Rio de Janeiro is this morning so I’m double duty-ing, which is mighty fun. It’s fierce snow-y here too, we had something like 40cm over three days and I think it snowed for four others too, finally it stopped yesterday as it was too cold to snow, something like -15C last night. Anyway, yea, I’d to collect herself so I trundled along with the trusty hound on hand and we traipsed through the snow.

The sun was splitting the stones as we’d say at home, one of those lovely, blue-sky-winter days we don’t get all too often. The town is a bit quieter than usual and I’m not sure whether it’s a pre-Christmas lull or if it’s just the fact that all of the back roads and residential streets are a pain to drive on still with all the snow. I got to the school, tied up the dog, called up for her and then got here all dressed for the cold and we began our way back, stopping approximately seven million times so herself would pick up snow and throw it at me, or she’s try and rub some snow off either the many cars parked along the way, or litter bins, or gates, or fences or walls or branches or anything else snow can be on.

There’s a graveyard on the way home, usually we’d walk through it but not with the dog. Some people do but, ah lads, you don’t want to be in a graveyard and see yellow snow around the place. The dead don’t care obviously enough but still…anyway, I posted a picture of it on Twitter recently, it’s lovely, full of trees, and greenery during the year and also quite pretty when all this snow is dumped. As we turned the corner to go around the back towards up where we live she stopped beside one of the many mounds of snow and stuck her arms in as far as she could just to see how far they’d go.

Now, I’m kind of rushing a bit, I don’t have a very long lunch break and I need to get her back and fed and then myself and then back to the grind. It’s a pretty funny thing to do but she’s gonna start feeling cold very soon and I’m getting a bit anxious with her as she’s been stopping and starting so many times already with the snow. Kids’ll be kids and all but c’mon now, get a wiggle on love.

So, I’m getting impatient and then something, well, not strange but well, I dunno what it was to be honest. I’ve no idea but it was something. Above us in one of the many tall trees around the cometary two very young blackbirds are flying and chasing each other and twittering at one another. They must come from the same brood and I’m guessing while standing there they must be siblings.

At the same time I remember something Peter Kingsley has said many times in his talks, about paying attention to the world and being aware, or mindful, and one of the easiest ways of doing it is to listen to the sounds around you, he always mentions birdsong. I say to the young one to check out the the birds and they’re still play-fighting and chasing each other across different branches of the same tree and then, and I’ve no idea why, they split off, one of them flies down beside us, landing on the top of a fence and he’s singing away to his buddy back up the tree. We’re walking in his direction and as we get closer he flies a few meters up the footpath, landing on the fence further along and he’s still singing his wee heart out to his brother back in the tree.

Well, the wee bosswoman must’ve been taken by it all because she starts singing in that funny way little kids do, just stringing words together in melodic sentences and whether they make actual sense or not doesn’t particularly matter. Mama-and-Tata-b 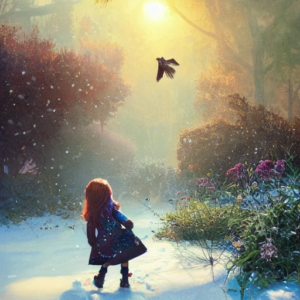 uy-me-ice-cream-and-Hektor-the-dog-wears-no-pants-and-i-like-ketchup-on-my-toast. And she’s doing it in English, which is a bit odd for her, as she’s not mad about the English language, preferring his native tongue.

It came into my head then, a mis-remembered quote from an old Indian guru about the innocence of a child and I just couldn’t get it together in my head, something about we know God loves man because He keeps sending children; I was trying and trying and trying to recall it properly and she’s singing away to her heart’s content as we, all three, continue walking home. The birds are long gone by now. I’m still feeling a bit anxious because we don’t have much time but she’s making me laugh with her silly song about Mama and Tata and her brother and the dog and her schoolmates.

We’re nearly home now and we’ve come up around the back of the house, past the half-way point of our hill where we walk down a few meters to the house, it’s quite slippy with the snow and ice and she starts slipping and sliding and generally having the craic and then it finally hits me to let bloody go of this gnawing, creepy, unnecessary anxiety that’s doing me no-good whatsoever, all it’s doing is taking me away from spending a few nice moments with my daughter on a beautifully sunny day in the snow.

So I start slipping and sliding with her, holding her hand and the dog’s leash too and now we’re both laughing (poor Hektor has no idea what’s going on) and she starts singing her song again but this time when she finishes a sentence I jump in with one that’s as ridiculous; Tata-has-a-smelly-bum-and-he farts-like-a-dragon and she tries to one-up me and we’re laughing and it’s sunny and snowy and there’s dogs barking in gardens and birds singing and it’s all quite lovely thinking back on it now but at the time we were both only doing what we were doing not paying attention to thoughts or what was going on around us. Both just being children.

We pass a neighbour’s house and the lady-of-the-house is just opening her gate and leaving, she hears us singing and laughing and has obviously been watching us sliding on the ice and she’s laughing at us too. We all say Dzien dobry to each other and laugh. It’s mad the fun you can have if you get out of your own way.

We got home anyway, and she got fed and so did I and I got back to work but in a lull between races I found the quote, it’s from an Indian writer/philosopher called Rabindranath Tagore. You might know him; he was the first non-European to win the Nobel Prize for Literature and sure if you don’t, that’s some nice trivia for you. Anyway, he once wrote:

Every child comes with the message that God is not yet discouraged of man.