Eckhart von Hochheim has become a big hit within these four walls I call home. Meister Eckhart was a great man for, well, you could just put a full stop there couldn’t you? What I meant to write was he was a great man for putting his thoughts about God into action. Of course, he’s one of the most well-known Christian mystics but rather than just writing down his ideas, in German rather than Latin to reach more people, he would also give lengthy sermons about what his thoughts were and the more you read up on him the more you will notice than he didn’t just stand on the shoulders of other Christian mystics that came before him, he also delved into Eastern and Ancient philosophies.

In his own words “I have read many writings both of heathen philosophers and sages, of the Old and New Testaments, and I have earnestly and with all diligence sought the best and the highest virtue whereby man may come most closely to God…” (source)

Now, unlike most Christian preachers he would quite often use his sermons as what we’d call ‘thought experiments’ and challenge his congregations and audiences to ponder upon the being-ness and is-ness of both themselves and God. There are numerous occasions where we can read than in his sermons he would say things like, ‘I’ve never said this before,’ or, ‘the thought has just occurred to me,’ thus inviting those listening to engage with the same thoughts. There’s an often overlooked characteristic which most of the best teachers, gurus, yogis, whatever term you prefer to use, all share. They all wanted their students to think for themselves and to find God, being-ness, unity, again, whatever you want to call it, by themselves. They were more than happy to teach but ultimately it was up to the listener to do the work. It would appear that many, many people fall into the trap of following exactly what certain spiritual teachers say and end up idolising the teacher over the teachings.

There’s two passages in particular I’d like to quote here:

Being is God…God and being are the same – or God has being from another and thus himself is not God…Everything that is has the fact of its being through being and from being. Therefore, if being is something different from God, a thing has its being from something other than God. Besides, there is nothing prior to being, because that which confers being creates and is a creator. To create is to give being out of nothing.

What is Life? God’s being is my life, but if it is so, then what is God’s must be mine and what is mine God’s. God’s is-ness is my is-ness, and neither more nor less. The just live eternally with God, on a par with God, neither deeper nor higher. All their work is done by God and God’s by them. (source for both).

Let’s have a gander at these quotes. In the first one Eckhart is saying that being is the same as God because anything that came into being not created by God wouldn’t be God and therefore just wouldn’t exist. How could something exist in God’s creation if God hasn’t created it? It couldn’t. This is Neoplatonism 101 here lads. I also like the final sentence and I think it’s something artists/writers/musicians/builders, those of us lucky enough to have a job/hobby where we create things should remember; to create is to give existence to something and to really think on that for a while can give some appreciation for how profound it can really be. For example, even just to write a song for a lover that you might only even ever play once for her is a thing of incredible, and heartfelt, beauty. To think of all the little things that had to happen for both you and her to share such tenderness and love to be inspired to write a song about that love and then to let it go out into the aether, back into the nothingness it came from. That’s just majestically mind-blowing.

The second quote then addresses that age-old question of why are we here? If God is life then we’re here living life because the being-ness of living is God itself. It’s almost too simple and yet too deep to really fathom isn’t it? But like Eckhart explains, God’s existence and our existence is the same, it is existence, so they must be one and the same. Our being-ness and is-ness is the same then as the Big Cheese’s.

But Being-ness and Is-ness, well, it’s not exactly tangible is it? OK, I can smack myself in the face and I’ll feel it thus proving I’m alive, to myself anyway, but if we sit down and meditate and really investigate the bejaysus out of is-ness and being-ness it’s not a thing that’s touchable, like my pretty face is anyway. But it’s still there, there’s still an is-ness or a being-ness to that being-ness. And indeed, it self-reflects because it knows that it’s there. We’ll come back to this self-reflecting later, for now let’s look more at emptiness.

Of course when you dip your tootsies into Buddhism the idea of ’emptiness’ is going to come up a fair amount. And it seems to be something that Westerners in particular seem to have a problem with. Even back in Eckhart’s stomping days, the late 13th and early 14th centuries, he wouldn’t have termed what the Buddhists call ’emptiness’ as that. For the most part he used terms like ‘silence,’ ‘stillness,’ and even ‘desert’ for example. If the argument that the Western mind is ‘more logical/rational’ then trying to rationalise ’emptiness’ is always going to be problematic. But we can all appreciate what ‘silence,’ ‘stillness,’ or ‘desert’ could mean in the context of deep contemplation on the mysteries of existence. 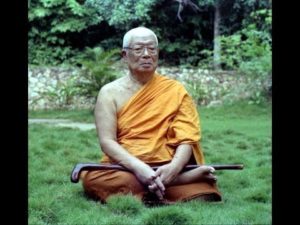 In Buddhism there’s a term, Tathātā, which has been usually translated as ‘thusness’ or ‘suchness’ and it’s the same as this being- or is-ness that Meister Eckhart spent so much time wrestling with. In Buddhism it’s seen as the absolute nature of things before even ideas or words concerning them exist. So, it is the is-ness of is-ness, again we see the characteristic of self-awareness here.  There’s a nice quote on the Wikipedia page regarding Tathātā that comes from Buddhadasa Bhikkhu, a perennialist and reinterpreter of Buddhist doctrine. Look him up, his rejection of the idea of rebirth rattled a few cages a few years back. Anyway, he said:

When tathātā is seen, the three characteristics of impermanence, dukkha (unsatisfactoriness), and no-self are seen, emptiness is seen, and specific conditionality is seen. Tathātā is the summary of them all — merely thus, only thus, not-otherness.

In other words then, is-ness and being-ness is what there is. It’s all there is.

As you’ll no doubt be aware from listening to/watching the podcast, I’ve developed a major grá for Rupert Spira over the last few months and around seven years ago he put out a video about what we’re grappling with here; is-ness and being-ness.

Now, don’t worry, I’m not going to dissect everything said in the video, do have a watch if you have the time after reading, but here are some thoughts about it. He begins by saying that is-ness is what everything and every object shares in our existence. And this being-ness is a kind of emptiness/void. This is the dreaded ’emptiness’ I wrote about above but here Spira says that it’s a first kind of emptiness. Matter is mostly empty, we perceive it as not being that but science will tell us that the space around atoms is mostly empty and while not empty in the sense of a vacuum, the space is  actually occupied by waves, perceived as points when observed. So, we can say then that matter is energy vibrating, it is a kind of emptiness yet we perceive it as matter. Bizarre isn’t it?

Spira speaks about this is-ness and says there’s another characteristic though, that this is-ness is known by the objects, people, beings etc. So, is-ness has awareness. Is-ness, or being-ness is self-reflective, i.e. being-ness knows of its own being-ness.

This then is a second kind of emptiness. Consciousness knows of its consciousness, there is no matter involved, only self-knowing of its knowingness. He says:

Spira says about this:

He goes further and explains that space is what the mind occupies while matter occupies time. Both of which are ‘approximations and both are, as such, empty as well‘.

To end the video he explains that the experience of love (mind) and beauty (matter) are what happens when these two different aspects knowingly experience themselves. And who could argue with that? When you love something you know exactly what it is to feel and to be alive. The same goes for seeing or experiencing a moment of beauty.

The first is to pay attention to sounds, pick something you hear often, birdsong or cars in traffic for example. When you hear them, pay attention to the moment and simply be present. Feel your body, witness your thoughts without judgement, do whatever it is that makes you feel there in that  moment.

The second is to just stop, engage with one, or more of your senses and say, I’m here and be present. Another is a meditation I made for myself based on Peter Kingsley’s mêtis because “when we live [the illusion] to the full, to its furthest limits, we are nothing but reality fulfilling its own longing” (source). Let’s ignore the ‘illusion’ word though, that’s not my bag at all. I sit or lay down and I say to myself ‘I see, I feel, I think, I taste, I smell, I hear’ as a mantra, repeating and repeating and repeating and doing the things I’m saying seeing, feeling, thinking, tasting, smelling and hearing. It’s not an easy meditation but when it all syncs up together, everything simply is.