Read this book on Scribd, get a month free and I get a a few weeks too!

Herself gave me the idea that I should write a wee about the books I’m reading. She was asking me whether I remember most of the books I read, and I had to admit that, well, I remember the interesting bits, mostly, but of course you’re going to forget a bit. 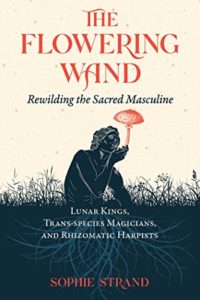 So she said you should keep a diary of all the books you read for the year and you can tell people about them too. So, let’s kick off 2023 with the first one then; The Flowering Wand: Rewilding the Sacred Masculine, a book written by Sophie Strand. I don’t know much about Ms Stand, I’ve just had a quick look at her socials there and they clock in at about just over 40,000 across Instagram and Twitter.

What’s this book about? Well, first of all a hat-tip to me auld mucker Tommie Kelly for recommending the book. The book is of the basic idea that masculinity these days is all very toxic and has goes awry. And that if we actually examine the places where our ideas of masculinity come from then we’ll actually have a better idea of what it was supposed to stand for and we’d all be better off for it.

The Heroes of Mythology

Oh, I nearly forgot to add, in the wee praise section at the beginning there’s a few words from Manchán Magan, if you might remember he was the host of a great TG4 documentary I was harping on about last year. I’m not sure if it’s still online but if you can find it it’s a great watch. Anyway, Strand begins the book by looking back into our ancient past and the myths which show that there was a prevalent Devine Feminine belief system present before the likes of the Ancient Greeks came along. The changeover from that belief system to the foundation of the Western World are best illustrated in the story of the Minotaur; the bull symbolizes the old religion and how it is left to rot in a Labyrinth. Now I don’t need to go into the ins-and-outs for her reasoning but it’s spot on and pretty much commonly-held.

She investigates the stories of Dionysus in great depth, he gets three or four very good chapters over the books. There’s Merlin, Osiris, Orpheus, Merlin. Tolkien and his characters gets a look in too and there’s some chapters dedicated to interpretations of Major Arcana Tarot cards too.

Now, while the ideas are well put together there’s a few things that are going to annoy people here. Robert Graves is referenced. Yes, the White Goddess chap. Look, Robert Graves should never be referenced unless it’s to say, Robert Graves; bullshitter. He just straight up lied in his books. There’s also mention of the Gospel of Mary Magdalene which was proven to be a fake quite a while ago now.

Unfortunately these things are standard in spirituality books and it’s disappointing because, well, you’ve taken the time to study something and search for evidence but you’ve stopped short of investigating the claims of those people and when reading a book like this it really calls into question the other research of the author.

There’s quite a bit of ‘woke’ language in there too. And I don’t really mind that but it will date the book and I can’t imagine that anyone reading it in 10, 15, 20 years time will care much for it as the issues just won’t be around then. Then again, that can all be sorted in other editions down the years so that’s very much a moot point.

Back to the overall argument of the book. Ya see now, the thing for me was that because I know a fair bit about Irish Mythology now I take it for granted that all the heroes and gods of old were representations of both the masculine and feminine principles. Sure, indeed, we have to make the argument that all heroes are the embodiment of both aspects and their best trait. Maybe it’s just me but when I think of a god, say Dionysus in an objective way then it’s easy to see what his masculine and feminine elements are and I’m not really sure if pointing them out is going to do anything about the perceived problem of modern ‘toxic masculinity’. It’s not like the likes of Andrew Tate and all those other pick-up-artist muppets are going to read this book and see the errors of their way. On the other hand though, if we could all look at our heroes in general and how we can find the balance of masculine and feminine elements in them, then we might be able to do it for ourselves.

Probably a better approach would have been to look at Carl Jung’s idea of the Anima and Animus for men and women and his theory that if we look to the masculine/feminine aspects that are missing in our lives then we can achieve a better, more-rounded, happier way of living. It’s worth checking out on Scribd and going straight to the chapters on Dionysus and the ancient religions for the best bits of the book.