Providence is given to those who take it.

I’ve spoken before about this on a recent podcast but a little reminder wouldn’t go astray.  In her book Mysticism, A Study in the Nature and Development of Spiritual Consciousness, Evelyn Underhill labels auditory experience as ‘auditions’. It’s been a fantastic read so far, I’m about halfway through and while it’s a far slower read that I’d want it to be, the fact is that it’s so full of stories and facts regarding mystics and their experiences that the going is slow. 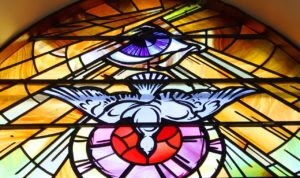 Back to the quote though, I have used a method that’s been very successful for having such auditions. Basically when I wake up, I try to fall back asleep for a few minutes when I can.  Being in that liminal space weird, exciting, inspiring things happen. How many artists have you heard of who would speak about getting their ideas from that moment at where they’re just about to fall asleep or when they’re waking up. Having two small kids means this doesn’t happen as much as I’d like it to but it is what it is.

I woke up one morning and it was, if I remember correctly, a weekend, so the wee Murfs didn’t need rushing off to playschool so I was able to put my head back on the pillow, closed my eyes and tried to drift off again. What I’ll do is I’ll meditate, just try to keep my mind clear, count 1-2, 1-2, 1-2 for my breaths and if something comes it does, if not then it doesn’t.  As has been the case in all of these audition experiences I heard the voice of a woman, almost a whisper and she said ‘Providence is given to those who take it.’

What is Devine Providence?

What’s that mean? Providence is something to do with god’s will, isn’t it? God’s good will, i.e., God’s Grace? Or is it a spiritual troll and it’s something to do with that place in Road Island as well, no Rhode Island, of course it’s not spelt Road Island ya muppet. Rhode Island isn’t an island, I didn’t know that until today and Martha’s Vineyard, which is an island is close by. The more ya know eh? Back to the game at hand. What are you supposed to do when you hear a whisper in your ear when you’re in one of those liminal places? First of all is it real? Can I trust it? If I can trust it, is the information trustworthy? Who said it? The Big Cheese, the HGA, Mary or has the wife left a walkie talkie behead the headboard and she’s twisting my melon…man?

I’ve pretty much left this experience alone for a while, although I’ve mentioned it on the podcast,

which doesn’t feel like it’s public at all, pretty much the conversations between Tommie and I are what a ‘normal’ conversation would more than likely sound like between us, albeit we’d probably swear a lot more. Only two other people know about it, both of which said more or less the same thing when I asked wtf does that mean; a shrug of the shoulders and a heavy exhalation meaning ‘damned if I know Spud man’.  But, I’ve wanted to leave it alone, I felt like I needed it to percolate in the background for a while. Last week’s article brought it back to me and I’ve delved into some possible meanings since then. Hopefully it hasn’t gone rank like coffee that’s been there for too long but then again, I’m not one of those weirdos (I am a weirdo, hands up there lads) who doesn’t drinks coffee for the taste, it’s for the thing that tricks my brain into thinking I’m not tired so we should be fine here. And I actually like cold coffee. Freak, I know.

Let’s look at some definitions first. The Oxford dictionary defines Providence as: God, or a force that some people believe controls our lives and the things that happen to us, usually in a way that protects us. The Cambridge Dictionary defines it as : an influence that is not human in origin and is thought to control people’s lives and Merriam-Webster defines it as: divine guidance or care. All pretty similar definitions there, the first and last ones especially, the care or protection of a supernatural something for our benefit.  The whole idea though of Providence has had people far, far smarter than me scratching their heads and stroking their beards for a long, long time.

In an article on Britannica.com, The Dutch poet, professor and historian of religion Theodorus P.

van Baaren writes that there are two basic beliefs when it comes to Providence. The first being: belief in more or less divine beings that are responsible for the world generally and for the welfare of humans specifically. Although omnipotence as an attribute of gods is rare, it is true that, as a rule, gods and other divine beings have considerable power not only over human destiny but also over nature. The gods take care of the world and of humankind, and their intentions toward humans are normally positive.

He writes that the second form is: belief in a cosmic order in which human welfare has its appointed place. This order is usually conceived as a divine order that is well intentioned toward human beings and is working for their well-being as long as they are willing to insert themselves into it, to follow it willingly, and not to upset it by perversion or rebellion.

Where do you stand on those? I’d have to swing with the first one because the second one seems to be more like (potentially angry) sky god will be upset with you if you’re not a good boy 24 hours a day, seven days a week. And especially with what I heard being “Providence is given to those who take it” then god’s grace is given to you if you want it, there are no retributions, if you want it, it is there, if you don’t want it, it’s still going to be there if you should ever change your mind.

Of course there’s a mighty fat proverbial elephant between the four walls here. What does all this mean for free will. If I have free will to choose to go along with the flow of the world then god’s got my back, right? But, well, where do I start on this one? Is free will a real thing? I’m not so convinced it is, even though I said on a podcast I do believe it, I’ve since changed my mind somewhat and since today have changed it again. Bear with me here…If I seem to make a particular decision, we know now that what I call ‘I’ didn’t really make that decision, it was internal parts of my brain that aren’t what we’d call ‘I’ that make the decisions before I told myself that I made the decisions. In the 1980s, an American scientist thought he’d proven that free will is nonsense. He had an experiment that recorded how the brain told participants’ arms to move before they consciously made a decision to move their arms, and significantly so. This truly was the death of the whole notion of free will for me. Or so I thought until today when I went looking for the scientist’s name, Benjamin Libet, and found that his theory has been debunked.

Is Free Will Real?

Now, this is important. Seriously, this is really important. So much of new age spirituality and new thought uses Libet’s experiment as a pivot for their arguments for things like surrender, god’s grace, law of attraction etc. In 2012, Aaron Schurger and two colleagues, Jacobo Sitt and Stanislas Dehaene, gave a possible explanation that no, we don’t make decisions before movement, the decision to move and doing the actual morement occur at the same time.  Some Standford researchers couldn’t resist the bait and along with Schurger redid Libet’s experiement with a control this time and found that Schurger was in the right, people’s subjective experience of a decision—what Libet’s study seemed to suggest was just an illusion—appeared to match the actual moment their brains showed them making a decision.

Until I read that linked article and a few other this morning I had been convincing myself that free will wasn’t real but now I’m not too sure. I prefer the idea that Bernardo Kastrup has on the subject, we tell ourselves stories about our decisions even though who we call ‘I’ isn’t really in charge of them, as really the decisions are made by different parts of the brain and they can be working with or against other parts and when we do something our inner monologue tells us that the identifiable ‘I’ did it and thus we give ourselves these myths. We play the hero, the victim, the warrior, the sage, the wounded within our little stories. He posits that that’s the reason why myths have been so important in the development of cultures since the year dot.

So then, let’s solve what Providence is given to those who take it means to me. For now anyway. If you know me at all dear reader you know I am wont to change my mind when I so feel like it. To me then it means that there’s a whole load of good in the world if you’re willing to see it and if you want more of it in your life, make more of it. Basically; be sound lads, just be sound.

Please indulge me the ending of this article with two quotes. The first from William Ames: The efficiency of God may be understood as either creation or providence. And another from St Ignatius: Above all, remember that God looks for solid virtues in us, such as patience, humility, obedience, abnegation of your own will – that is, the good will to serve Him and our neighbor in Him. His providence allows us other devotions only insofar as He sees that they are useful to us.