Over the past week or so I’ve endured two pretty-horrific visions during meditation sessions, I’d become somewhat ambivalent regarding meditating and a creeping dread had been entering my thoughts and knowing that meditating cures all ills I wanted to re-up my game and get back into it. I kind of wish I hadn’t now. 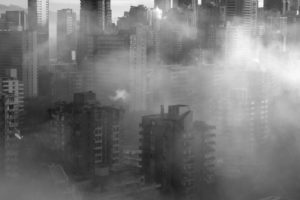 Somewhere in a hospital in Central/Eastern Europe a girl is born. She is fair-haired and blue-eyed. It is plastered all over Instagram, Facebook elsewhere on the internet by the girl’s parents and family. Her first early years are also recorded for all to see on the internet. Then I see this playing out all across the world with people in other countries doing the same thing with their children. A few years later and this nameless girl has her own social media channels; her parents make YouTube videos of her playing with toys and they are soon being paid to play with certain toys and products. The toddler is her own brand.

I see her as an eight-year-old and she’s being interviewed on television chat shows by hosts churning out content and when she’s of preteen age she’s now in a teen-girl band. A fast succession of images where her band mates and her are in PR-photography shoots. They enjoy wild success over their teenage years, they are mobbed by crowds constantly and they enjoy world fame. But the girl is alone, while surrounded by so many people she doesn’t know herself, she does as she’s told as she has always done so far.

Temptation appears thanks to her fame; drugs, drink, sex, harassment from an over-eager media baying for headlines. She is confused and upset that she doesn’t control her life. This spirals until the band falls apart, this leads to drugs and alcohol abuse.

Her hangers on force her into therapy and she emerges as a swan. Clean and free of the yoke of drug and alcohol dependence she takes on a solo career; successful music albums follow, massive world-wide tours of sold-out stadiums. She writes a book about her life and stars in films. She is a success but still totally empty of a personality, she is what was created; she is not an individual. She plays a part made for her.

She again spirals into more drug and alcohol abuse and abusive relationships. She fights with a lover while both are on a cocaine-fueled bender, he strikes her and she takes a gun. She shoots him and then turns the gun on herself. Her headstone says she was born on August 6th 2022 and died October 1st 2045.

Across a barren, sandy land I walk towards a city. In the distance I can hear Roger Water’s singing his Pink Floyd song:

I see large vehicles like the Sandcrawlers from Star Wars but on their sides are amour and within the armour are solar cells to generate power. This vehicles cross the ground, stopping and soldiers get out where they set up camp and carry out exercises.

A gigantic city is in front of me, so high it touches the sky, streets are replaced by bridges that connect the sky scrapers. There are streets below but they are the den of the destitute, the homeless, the drug-dealers, the pimps and whores, the robbers and black-marketers, the murderers and the traffickers. There is great pain and suffering here; people are numbered, in their youth; they are tested and given careers according to their scores. The pregnant are scanned for ‘defective’ babies which are aborted if illnesses, or future ones, are found.

What rebellion that does exist is stamped out quickly. The state knows all and rules with an iron fist. Suspicion is everywhere, ordinary citizens don’t know who they can trust. So they live alone, either as singles or in small families in giant residential towers. The authorities spy on everything, camera drones fill the sky and public places, even shopping receipts are added to personal files and people snitch on others to obtain additional social credit for luxury purchases like vacations or personal technology; even for better medication.

Humanity is ruined and weighed down. The state rules all as it churns industrial and technological products to sell back to the citizenry.

What countryside there is, is divided into farms, mostly tillage and crops but there are some with some animal flocks. I see large forests but they are quite a distance away from the populace, they are the breathing lungs of the planet and actually they take over whole countries to offset the waste and pollution caused by the grey industry of the state.

What has happened is humanity has allowed an idea to take over. The idea of strength in numbers. Individuality has all but been replaced; people are numbers now, they are roles given to them rather than they learn them or they find them. At first the idea was seemingly benign, people living together in towns and communities would be beneficial, more trade, common culture, common rules and so on. But then people began dividing, the aristocracy emerges and they war for resources. Then currencies were established and to use them credit is charged meaning you had to pay back more than you borrowed. People continued to divide into smaller groups within the overall larger community over the 1000s of years; based on their sex, talents, education, trade, guild, religion, career, sexuality etc. until it became so compartmentalized that the powers controlling industry/trade/government etc. learned how to control people in their smaller groups. The people never had a chance once the ball got rolling. ‘The Empire Never Ended’ as PKD often wrote, ‘it just changed name’.

People are now faceless, just units in jobs to be exploited. When we began exchanging our time for money rather than our skills it was the beginning of the end. The cities are loveless, they are not supporting life, just a daily grind for the people and their pets. They support only commerce, industry and greed by the few in control and it’s sold back to the citizenry based on the roles the are given in society and their social score.

There’s a belief here; a quasi-fascist religion.
The State, the All, red flags with insignia, like runes but I don’t recognise them.
It’s all about strength in numbers, there are no individuals, all just cogs in a greater machine with their role assigned.
But it’s corrupt to the core with paranoid leaders and police/army/security forces run in cell structures, you know your boss and some colleagues but you are rotated so often for duties you only know your role.
Obedience to the creed of the State and to those above you in the hierarchy are the utmost importance; Group-think and Group-speak abounds. But it is a society living in fear; people fear the Police who fear the soldiers who fear the upper ranks of the army and so it continues all the way up the ladder. This society is a fascist state, run like a mafia organisation.

Now, I see my my hands, my hands are blue glass with 1000s of tiny galaxies whirling within them;
I understand then. We are creators and what we do creates millions upon millions of possibilities.

An immense feeling of love now. The opposite of the city.

The cities are full of people who barely know what love is. They confuse it with duty, they’ve been told it’s the same thing. There is love between some people, some family members who were forced together in state-imposed marriages who found love but it’s not enough. People have stopped loving themselves.
How can they love themselves when they’re forced into work, forced to live in boxes with no greenery around them, no opportunities for actual happiness and not even the stars visible in the sky?

I’m beside a vast forest. The city cries in the distance.
And the trees in the forests moan, these silent and non-judgemental witnesses to all of human history watch the grey of the megacities as they grow taller year on year.

There is hope though; faint.
There’s a small band of cloaked young people escaping the city.
They set up home in the forests and live off the land, away from the watchful eyes of the authorities in the State.
They live free, they marry for love, they learn their roles, there is no commerce, only exchange of crafts and talents. They learn to love and accept themselves and each other.
This is how we stop the machine.

I’ve been quite shock-up by these. I feel like the weight of the world has been on my shoulders since they happened, although I know that’s just a reaction and I’ll get through it. It’s scary nonetheless to think that a future such as those I saw above can happen. The vision of the girl and her life of fame has probably already happened to some celebrities who have been famous since the beginning although I can’t think of any whose life has ended in a murder-suicide but then again, I’m not exactly an expert on celebrity culture.

I don’t really know what to do with these other than share them. I feel as if I need to do something to stop them happening but what can one small cog do against such horror? I’m not sure but I know a broken cog can break a machine for a few hours or a day at best so maybe we all have our role to play and become broken cogs in the machine so we can stop a coming dystopia. Love is gone in the Second Part and lord knows we can all do with more of that around. But, being honest I don’t think a dystopia is coming, all dystopian books and films aren’t really about the future, they’re about now so maybe these are about a sense of powerlessness in the world?

And if that is the meaning then, well, y’know, I can thumb my nose at both of the above because I’m quite okay with being a small and powerless cog in the wider world because all the cogs matter and so long as I’ve got some love in my heart and some to give to those around me that’s what actually matters. Wish the archetypes didn’t have to be so heavy-handed sometimes.