There was a interesting conversation over the last few days on the AIWW Discord concerning awakening and what’s really the point of it when you’re still going to be the same person after enlightenment, if enlightenment is even possible.

Now, there’s no point getting into the conversation, it’s very cheap writing to have screenshots of what people said and discuss the points made and indeed that’s why so many media outlets do those types of articles but I thought I’d reflect on the subject here, gather my thoughts as I write them and in the edit find my (current) thoughts on it.

Now, look, if you shine a shite, you still end up with a shite. It’s just a shiny shite now. And a shiny shite isn’t much use for anything. And this is the argument against awakening in essence. If you’re a gobshite before awakening then what’s the point in awakening if you’re still going to act like a gobshite? And it’s a fair question, especially when we see the popularity of what’s called the Direct Way/Method to awakening. 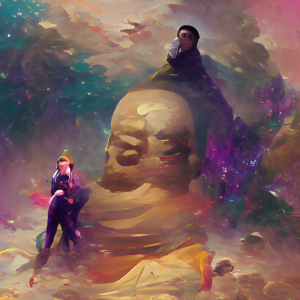 And that’s pretty much it, it’s almost like a party trick, magic trick even, you get people to ask the appropriate questions of themselves, or you ask them and guide them, until they come to the realisation that we are all (just) conscious awareness experiencing the universe. We are not our identities, we are not our thoughts, we are not our sensations etc. and eventually you come to the end of that line of thought and you’re faced with the non-duality of existence.

I believe in the Hindu tradition it’s called Neti Neti where a guru would guide a practitioner to the nature of Brahman via discriminating between what things aren’t; neither this, neither that. The Direct Way is the same then but there’s no morality teaching whatsoever, there’s just a following of the line until you have a peek into ‘reality’ and nothing really changes, you went into it a knob and you come out of it a knob. And then you’re disappointed because the idea of awakening you’d bought into promised earth-shattering, ever-lasting bliss.

But look, some people do have life-changing experiences when they experience non-duality, they get a glimpse that the universe is all one great thing and we as individuals are experiencing it as it unfolds and they experience the love and bliss of knowing that everything and anything is connected to everything else. We’re all tiny, wee, insignificant cogs in a wheel but we all, as those cogs, help turn the wheel.

Most don’t however have that, they ‘see’ or experience non-duality and nothing really much changes. Why? Well, many of us expect that we are supposed to change because we now possess this glorious knowledge. But reading that we should be brainy enough to know that’s your ego wanting a part of the action so that can get lost. And many of us have been given bad information by teachers/gurus/youtubers with lovely hair, that having awakening experiences will lead to untold knowledge of the cosmos and whatnot.

But that’s plainly bullshit. If that was the case then why was evolution not ‘discovered’ until 1859. Surely Buddha would have known about it if this was the case, or at least some of the other enlightened gurus over the 1000s of years would have known about it. How come they all kept it secret? They didn’t know, simple as that. Awakening or enlightenment isn’t going to give you vast amounts of knowledge, indeed there’s a good argument to be made that it’s about peeling off knowledge, learning to disassociate with your supposed identity or identities as the case usually is.

So what is the point of it then? The point is to get away from identifying with what causes pain, suffering or as the Buddhists call it; dukkha. Dukkha is a funny one; we’re told that the Buddha said these words; “Birth is dukkha, aging is dukkha, death is dukkha; sorrow, lamentation, pain, grief, & despair are dukkha; association with the unbeloved is dukkha; separation from the loved is dukkha; not getting what is wanted is dukkha.” Dukkha has been translated from the original Pali into English as ‘suffering’ but over recent years this has changed somewhat as more westerners have learnt Pali and go about translating ancient texts themselves. What we now know is that dukkha was a word used to describe when a wheel on a horse wagon, or chariot, wasn’t running correctly. It was off-centre or annoying, not-aligned, or as we’d say back home, a bit of a pain in the arse. 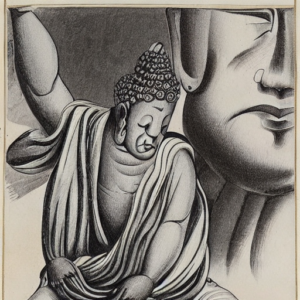 But it’s easy to see why it was translated as ‘suffering’. We are lead then to the question of why do we suffer, or why are we annoyed, if you will, why are our lives not aligned, why is everything a bit of a pain in the arse?

I’d argue that we ‘suffer’ because we identify with our needs and wants and desires and by practicing meditation we learn to look at this suffering and eventually learn to discard it. We identify with things we have absolutely no control over; our heritage, our nationality, the views of our parents etc. etc. All these things are labels, labels we buy into. One of the craziest ones we buy into is our name.

Or maybe that’s just me. Anyone who has listened to the TaSTA podcast will know I have a thing for names. I just find them fascinating. Y’know, that thing has a name and we call it by that name and now we identify that thing by that name because it has that name. Just think about that for a second, that’s mad. Although it would be even madder if we didn’t have that system of thought and everything had a new name every time it was mentioned. Although, that would be serious craic for 24 hours all the same. Our first label is our name and that’s a heavy one to deal with. It was given to us by our parents for a reason; we’re all named after something, after some reason, be it an ancestor, an event, a something that was/is important to the person who gave it to you.

We know this without even knowing it and we’re stuck with this meaning that we’ve given to something that we didn’t bring on ourselves. Which is bloody insane when you think about it. Then when you’re older you look up the meaning of your name or your parents tell you who or what you’re named after and that brings even more meaning and more weight and more dukkha. Look at my name for example, my first name comes from Latin and means ‘nobleman’, my middle name comes from Greek and means ‘victory (for the people)’ and my surname is Irish and means ‘sea warrior’. In the name of god, how can I possibly deliver on that? A noble(man) victory (for the people) by the sea warrior, no that doesn’t make sense, the nobleman sea warrior something (gives, provides, fails to give) victory for the people. That’s far too much responsibility for me, I can’t even swim ffs. But d’ya see what I’m doing here? I’m playing the hero/victim in this story and knowing that I am; that’s the wee glimpse of truth.

To get back to why you’d bother with awakening/enlightenment, look, it’s not that life won’t hurt you anymore, life is life, you’re going to have some god-awful experiences that you wouldn’t wish on an enemy but you’re also going to have moments of pure love and joy too. The reason to aim at awakening is so that when times of pain and suffering and dukkha come along then we don’t let that become a source of identification for us. It just leads to more of the same and we’re bound to keep making the same mistakes if we don’t learn from them. And this ties into the last blog I wrote about being more compassionate to ourselves and loving so that we can learn.

The Direct Way will, indeed, does, work for many people and when they have their awakening they know that compassion and love are there and ever-present. But for most of us who have been wounded and hurt by life it takes us a bit longer to see it. We’re like those dogs in the shelter that want you to pat them but we’re a bit scared because we’ve been beaten before. And we want to like life but it’s not really been fair to us.

But, hold on, dear reader, we’re doing it again. The hero/victim thing is back. Damn you! It just cannot help itself can it? So, look we see here how fast we can fall into the trap of identifying again with past events or past traumas and of course it’s understandable, it’s human for god’s sake but catching yourself doing it helps break the cycle of your dukkha and like I wrote above it’s all about not identifying with the things that cause pain/non-alignment/are a bit of a pain in the arse so that we can have a better life and treat ourselves and those around us with the love and compassion we all deserve.

One thought on “The Hero and Victim of Awakening”