On Sunday night just past (3-10-21) I was particularly tired, it had been a long week workwise and between doing a few things around the house, keeping the kids busy I was shattered tired by 9pm on Sunday night. But being the good glutton for punishment that I am I soldiered on for another hour and a half before bed.

When I finally did lay my head down it wasn’t long before that feeling came on me again and I knew a vision was coming. There seems to be two times when these are most likely, when I’m fasting or when I’m dog-tired. But honestly, I don’t want to force myself to the point of exhaustion every time I’m to have one of these. Anyway, as I felt it coming on the first thing I could, for want of a better word, see, (or maybe experience is a better way to phrase it?) were fractals, black and silver and white. Where the black met the white there was always a slight line of silver to keep them apart. There was kind of a mirror sheen off of them as well and like a kaleidoscope they were constantly, but slowly changing their form.

What it reminded me of in the instant was…d’ya remember that flip Rubik’s game thing, I’ve just learnt it was called Rubik’s Magic (hmmm) that came out after the initial 1980s Rubik’s Cube madness? Yes, I’m older than you, probably, showing how long in the tooth I am here but, if you don’t, they looked like the image to the right. The one on the right side of the photos is usually what you ended up with, the one on the left is the correctly-completed one. Anyway, what I saw/experienced was a giant fractal, just out of arms reach, constantly changing like a kaleidoscope, black, silver and white all interchanging and evolving and it, well, shined and it’s movements reminded me of this Rubik’s Magic puzzle.

It could have lasted 10 minutes, it could have been 10 seconds. It could have been an hour. I have no idea. Time seems to just disappear when these things happen. One second you’re lying in bed the next you’re just, I don’t know how to explain it but I’ll try, it’s almost like you’re beyond it all, suspended outside time and space. It doesn’t even feel like time stops or slows down, most of us have experienced that, like when you’re in a crash or something dangerous is happening around you, time seems to kind of slow down. It’s to do with becoming intently focused on what’s going on around you so you can react in the best possible way and either get the hell out of danger or face it head on. It’s not the same as that. Time just isn’t a factor, it’s not that it doesn’t exist because if it didn’t exist you’d know what it is for it to not exist. Time just isn’t.

Yea, look, I don’t know what to make of it either. I hope I’m explaining it in a way that you can understand it. In John Higgs new book about William Blake (William Blake Vs the World) he talks about what it must be like to try and explain a feeling to someone that’s never had it before, or explaining a colour to someone who has no concept of colours. This feels a bit like this as I write it. No doubt, this can all be easily dismissed as the ravings of a lunatic but, ah well, I can only stare off into the distance and sigh you-weren’t-there-man, you weren’t there. And then Creedence Clearwater Revival’s Fortunate Son kicks in. 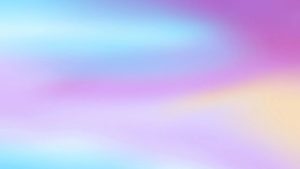 This fractal, or was it a mandala? What’s the difference? A fractal is a never-ending pattern that repeats itself at differing scales while a mandala is a geometric doohickey that represents the universe. It would seem then that the difference is the mandala has the complexity within it, while a fractal changes and evolves its complexity as it scales up. OK, what I experienced then was a fractal. The fractal anyway gives way and there’s a pastel ombre, I want to say background but it’s more like a landscape but it’s also not a landscape as in when you watch a film and you know it’s not a real background it’s like a background from a 1970s Clint Eastwood Western. It looks real but it only looks real, it’s not.

This lingers for a while and it it changes from being ‘pretend real’ to having a sense of life about it. Then I notice it moves to the rhythm of my breathing. I didn’t even know I was breathing until I noticed it. Is this what morphic resonance could look like? Is any of this making sense?

Thoth Be, or Not Thoth Be

Then the proverbial hits the fan. From nowhere a massive figure appears from below the pastel 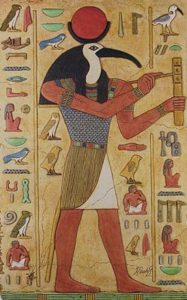 background and he’s suddenly towering above me and I am so utterly and totally tiny and infinitely tiny. It’s Thoth. Well, mostly it’s Thoth. It’s Thoth but with a different beak. Thoth is almost always depicted as having a long beak, from the Ibis bird apparently. However, as he looms above me he seems to have what looks more like a puffin’s beak. Maybe this was done for comedic effect so as not to scare the living bejaysus out of me. No idea.

And then he’s gone and I’m drifting off to sleep begging myself to remember all this in the morning. Since then I’ve been looking up ‘las’ and getting very little. Las is used in Spanish and it’s basically a plural of ‘the’ so it’s pretty useless for symbolism. The only other language that I could find that has a word ‘las’ is Polish and it means ‘forest’. Maybe there’s a Pan connection here? In Greek mythology Thoth is kind of the same as Hermes but there are some differences and Hermes was Pan’s father. Thanks Bera for pointing it out to me.

Of course I turned to the oracle that is Tommie Kelly and asked for his opinion on it all. Of course he pointed out straight away that it could have been ‘lass’ and not ‘las’. Lass obviously meaning ‘girl,’ a word commonly heard in Scotland, Ulster and Northern England. He also turned up an ancient pre-Arabic goddess called Al-Lat/Allat/Allatu/Alilat who was basically the Devine Feminine from that part of the world.

‘god of the moon, sacred texts, mathematics, the sciences, magic, messenger and recorder of the deities, master of knowledge, and patron of scribes.’

He’s pretty kickass in fairness but if it was him, why give me a different name? Does ‘las’ here having something to do with knowledge in nature, i.e. the Polish translation of ‘las’ or was he calling himself ‘lass’ as a female to turn my attention to the Devine Feminine again?

I pulled out my 40 Servants Deck on Monday night and did a three card reading. Two cards for interpretation, one for advice. For the first two cards I got The Librarian and the Depleted. Seems to fit, Thoth was a big nerd, so if any 40 Servants card is going to fit him it’s The Librarian. And my old friend, The Depleted, Spud mate, you’ve got to give it all up, exhaust yourself and run to the ends of the earth to get what you’re looking for. You’ve got to get past winter and the tough times but renewal is not far off. Keep going. I like The Depleted in fairness, means there’s a reward at the end of the hard labour.

The Guru then for the advice. Use the lessons you’ll learn or have learnt in your day to day life. I will. Peace man, I love you all. I don’t want to close this chapter yet though, maybe on the next TaSTa we’ll get the bossman to give his interpretation of the cards.